Apple Maps will let people see INTO your Home! As competition with Google ups, and it's suggested Apple may drop Google Maps, Street-view!

Apple Maps will let people see INTO your Home!


Ahh! The Peeping Toms over at Apple Inc. When they're done destroying the privacy of anyone who uses an apple Phone... they turn to spying on peoples' homes.. Wow, that sorta has a rhyme almost to it!

'Privacy campaigners have expressed concern that the two tech companies are engaging in a 'fight to the bottom' where 'all privacy concerns go out the window'.

Apple will hope to replace Street View as the mapping service of choice when they launch their new software for iPhone and iPad this week.

The new maps are so detailed it will enable users to look through skylights and see people out in their backgardens.
Until now, Google Street View has only allowed people to see the same things they would walking down a street.

News of the software emerged after it was revealed that Apple had acquired C3 Technologies, a mapping specialist which creates photo-real 3D maps with photographs 'painted on' to 3D models of cities.'

Daily Mail | 'The spy gear which could slay Street View: Apple calls in private air force with military-grade cameras which can see INSIDE homes to create new 3D map' by CHRIS PARSONS at UPDATED: 13:14 GMT, 10 June 2012

Daily Mail originally shared this post:
Apple iPhone users will be able to look inside homes as the company unveils a new high-definition 3D mapping service developed with its own private air force.

Apple to reveal 3D mapping service 'next week', as campaigners say privacy will go 'out the window' thanks to high-resolution images which will spy into your home »

The software giant's new service, an iPhone and iPad app it hopes will overtake Google Maps, will give unprecedented access into homes and buildings thanks to military grade camera equipment used by A...
One Nation Under CCTV! Newman Street Post Office, London!Post Office near Newman Street, London, United Kingdom And the story behind the Grafitti: Daily Mail | 'Graffiti artist Banksy pulls off most audacious stunt to date - despite being watched by CCTV' by staff at updated at 14:52 14 April 2008 British Timehttp://www.dailymail.co.uk/news/article-559547/Graffiti-artist-Banksy-pulls-audacious-stunt-date--despite-watched-CCTV.html 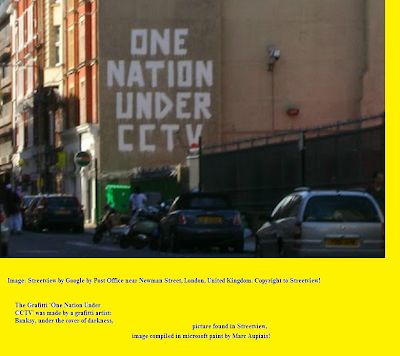