Payback over 'gay marriage' opposition? Frigide Barjot threatened with expulsion from her home by City of Paris.

The organiser of a march for the preservation of the then children's right to have heterosexual parents, comedienne stage named: Frigide Barjot (Frigid Looney, real name: Virginie Merle), and her husband: stage name Basil Koch (real name: Bruno Tellenne), may be kicked out of their council home after a summons for eviction against them, delivered at the behest of a company mostly owned by the socialist run City of Paris.

A company 80% owned by the City of Paris, Régie immobilière de la ville de Paris (RIVP), wants the couple thrown onto the streets, alleging unlawful sublease and the use of their home for some of their business activities, both in relation to their company: Jalons. The RIVP issued summons in mid June, Le Parisien learnt, speaking of a Frigide Barjot chocking down anxiety over the telephone to their reporter, saying: 'This is serious, we are threatened with eviction', and noting that they had always paid their rent of what they claimed was 3 500 Euros a month, on time. The summons would be effective July 3, claims Le Figaro.

According to Wikipedia: 'The Régie Immobilière de la Ville de Paris (also known as the RIVP) is a public housing agency created in 1923 for the construction of low cost and affordable housing. They manage buildings with average rents for use by the middle classes on land made available by the demolition of old fortifications of Paris, France.'.

The Federation Street home of the couple, is something dear to them, Basile de Koch has lived on Federation Street since 1983, Frigide Barjot, since 1994. However, it is alleged that they did business for Basil's company, Jalons, at the home, which is not zoned for business use according to RIVP, who also allege that Basil de Koch sublet to his business, for 9 000 Euros a year, and thus the Tellennes further in the RIVP's view, breached their obligations as tenants.

'But above all, we've lived in this apartment for years, why are they only meddling in our affairs now? It is a political gesture, they want to silence us, ' Le Figaro reports Frigide Barjot as saying.

Socialist Party member, Bertrand Delanoë, mayor of Paris, has been accused in this case of a political manoeuvre to punish Frigide Barjot for standing against the socialist party 'gay marriage' agenda. In fact, the mayor, is claimed to have delayed the move until the debate on homosexual 'marriage' wound down: with reporting claiming it was to prevent it being seen as a political targeting. The RIVP claims there are: 'One hundred procedures for abnormal occupation (illegal transfer of leases, occupation untitled occupancy for commercial purposes [which] are currently under review,' claiming that to them it is nothing special.

The RIVP however also claims: 'this procedure has been initiated (...) at the end of the detailed legal analysis of the situation.' - Le Figaro.

In the United States of America, the Internal Revenue Service was found to have unlawfully targeted persons for their political beliefs, while giving an easier time to those who held the beliefs of Barack Obama. It is in this sense that Frigide Barjot alleges she has been targeted.

The matter may go to trial in July.

The French Socialists enacted the 'Taubira law', enforcing homosexual 'marriages' earlier in 2013. The law has been widely unpopular among many French, who took to the streets to show their malcontent. There has been controversy also over Hollande's breach of his promise to allow a conscientious objection clause for mayors in heavily Roman Catholic France.

How to be public with your Facebook, without being public.

With scams using Facebook information to steal from South Africans, there are a number of ways to protect your account relatively, but still get the most out of Facebook. With email, if someone knows who you email, they can spoof your email to spam, all they need is an address book. Similarly, criminals now mimic Facebook accounts, and that address book: that friends list, as well as information, make you vulnerable.

Firstly, my favourite trick, which utilises followers, but also over time allows you to hide what you said:


Under account settings and Privacy is a useful little tool, which allows you to make previous posts private. I like to post publically for followers, but then later to make posts private, this is a nifty little tool for just that:

Go to about section, and on each shown bit of information, click the little cog, and change who can see to those you want, instead of everyone.

MAKE SURE you go down to where friends and followers are listed, and click the pencil on the right and edit privacy: 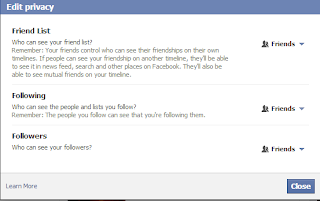 Do the same with music, with locations, etcetera.

See if you left any important information out.
(SAST/CAT: GMT+2), this article was posted by: Marc Evan Aupiais On Friday, June 14, 2013 No comments:

"Resigned the party Whip", what does it mean? (Question answered in text)

The Issue at Issue

The Principles and Research

Either way, I searched the phrase to no avail, until finally I decided to analyse occurrences of the offending Britishism.

Firstly, I found it was not the Party Whips resigning. Not only that, but in many historic instances several people resigned the party whip at once.

Less reliable but more direct, at the Bottom of one of the recent articles someone had asked what a 'resigned the party whip' was, in the comments section, and a polite person answered that it was not the Whip who resigned. Rather, someone had resigned their position in the party representation. This was certainly the meaning conveyed in the historic uses I looked into.

Further, a party whip according to the Oxford Dictionary is the disciplinary official of a party (a meaning which also carries over here in South Africa), however it also means the elected representation of a party in parliament, which I think is what the British press are getting at and into:

'2 an official of a political party appointed to maintain parliamentary discipline among its members, especially so as to ensure attendance and voting in debates.
British a written notice from a whip requesting attendance for voting. See also three-line whip.
(the whip) British membership of the group of MPs that form the official, elected representation of a particular political party, together with the duties or rights associated with such membership:
he resigned the Tory whip in protest at mine closures'

In applying these to the question of 'What is the meaning of the phrase: he resigned the whip'?


It does mean he or she, being a MP: that is to say: being a Member of Parliament, quit (resigned) the membership of the 'official, elected representation of a particular political party, together with the duties or rights associated with such membership' (Oxford above).