My experience with an Internet sexbot

My experience with an Internet sexbot


[View as Word Document]
In Japan and other such nations there is quite a market for virtual girlfriends, for lonely men who will never find love with any real creature. A good search on Google will bring up many a program from textbased to graphics based, to stem the tides of loneliness and make men feel as though they have company. Pornography and the ancient art of striptease fulfil similar market niches' desires for great satisfaction and unhappy happy endings.


During my high school years I created a simple textbased answer program. It had its own favourite colour, but did not have a sex, and was not designed to abate loneliness with the alimentation of a virtual compensate. More than anything, it was a fun programming project.


Today I decided to log into Skype on my cellular phone. I was quite surprised to find that I had a number of invites to connect with other people on Skype. I accepted the invites. The moment I did, one of the accounts instantly began speaking to me.


Those who desire to oppose human trafficking, created a virtual sex robot that pretends to be a little girl, and lures bad men in. The sexbot I had the pleasure of meeting however was designed to lure ordinary grown men. You might well expect a sexbot to be more responsive than the one I had the privilege of meeting. It did not matter what my responses were, the program clearly simply worked on any response. Some journalists have had the privilege of dealing with more advanced tools used by scammers. Mine did not even have a fake human picture. Nonetheless, by pure numbers it probably has worked on many, many men. Below are the screenshots of my enjoyable conversation with an all too responsive trap used by hackers and scammers. I hope you enjoyed the scintillating conversation. 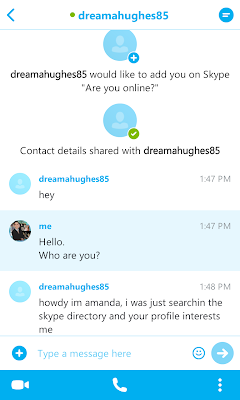 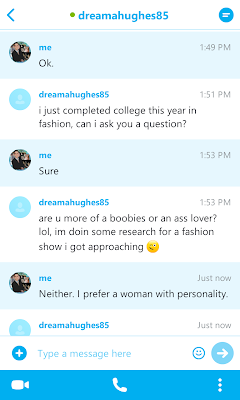 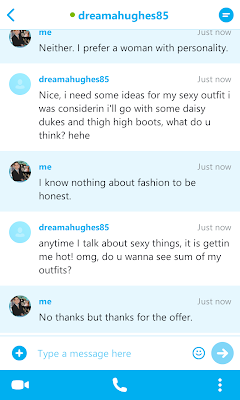 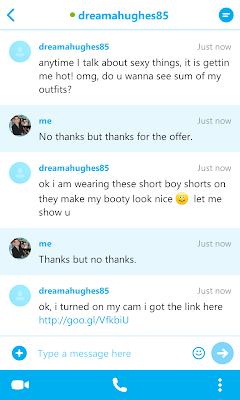