Mockery or Flattery? Helen Zille pretends to be black to get votes.

It isn't just black dancing that Helen Zille is attempting to get votes with. The woman who likes to be referred to as gogo (grandmother), by her few and far between black fans, has also taken to dressing like a black Grandmother, hoping it will buy her votes. So the question is: is her belief that dancing and dressing like a black grandmother is all it takes to get the black vote offensive or flattering?

Is she underestimating the intellect of her voting electorate with offensive gimmick, or is she spot on, is this all South African politics comes down to? And why is she so offended when people say she wants to become Zuma's wife (surely a show of her true disposition, of her secret disgust with the culture she pretends to emulate?

You will note in the screen shot below, she instantly goes in the attack, claiming that any man who takes a younger wife is the cause of HIV/AIDS).

We have also reported on her statements of who is not welcome in the Democratic Alliance: xenophobes, homophobes, sexists, etc. The people who believe homosexuality to be morally wrong, or fear jobs being taken by foreigners, or who have patriarchal views of society, consist of most South Africans statistically. This trend is especially most notably among black South Africans who may or may not know that due to their beliefs (whether applicable or not to a situation), they are not wanted by Gogo Zille. Helen remains very white in her ideological outlook, but thinks a bit of dress-up and dancing are what it takes to win over people she openly states she despises as we reported in the article linked to here.

SHE IS PREPARED TO DO THIS... WHAT WOULD SHE NOT DO FOR POWER? pic.twitter.com/Vfe5r9evCU 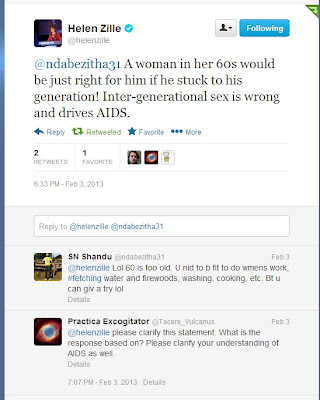 p.s. one of the retweets was by our editor in order to comment on it, not to endorse it.

Below: a song by the Corrs, with a music video about dishonestly mimicking an audience for money.