Southern Cross' Editor in Chief's: attack on "Catholic Culture"/"Trinity Communications", and "South African Catholic", both of which criticized the w

(Catholic Watchdog South Africa)
The "Southern Cross": is a "catholic" weekly sold in "Southern African" "Catholic" Parishes. The "Southern African Catholic Bishops' Conference" ("SACBC"): does have partial control of it: in "South Africa" their parishes sell the paper in churches around the country, where priests advertise the paper: to parishioners. "Cardinal Wilfred Napier": noted to us, in a 2008 email conversation: that the "Southern Cross": has what he called: an "anti-magisterial bias": and often portrays the views of the "world", rather than those of the "Church": we have published the email: here (">Cardinal Napier's response to concerns over the Southern Cross). 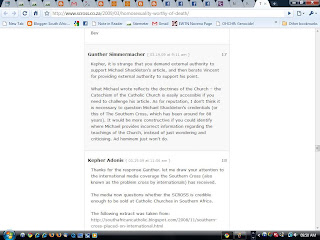 Reader links to an article by "South African Catholic": noting the "Southern Cross"'s status as noted by "Catholic Culture"/"Trinity Communications".

"Gunther Simmermacher": calls "South African Catholic": a "joke" of a site, and "paranoid", and like a "Valentine"'s day teddy: ironically siting mention of "seemless garment" approach to abortion: which "Catholic Culture": not our own organization had criticized the "Southern Cross" for: the "Southern Cross was supporting a radically pro-abortion politician via such statements.

Via email: "Gunther": editor of the "Southern Cross": had previously given "South African Catholic" full permission to criticize them positively, or critically. The "Southern Cross": also sidesteps the issues, and evidence noted by "Catholic Culture", by attacking the sources of criticism.

"Southern Cross" editor: says that the "Mitchel's Plain" church's priest has "banned" his paper: in response to the viewer of the article raising a banning of the "Southern Cross": the editor then goes on to say that the choice by the said pastor: was against the views of his bishop.


The "Southern Cross" has been internationally lambasted by Catholic Media, including "Trinity Communications"/"Catholic Culture": for their support of radically pro-abortion politicians, their conistent attacks on Vatican policy, their position on contraception, etc. They have also got a habit, according to "Cardinal Wilfred Napier": of the "Archdiocese of Durban": who replied (click here to view) to an email from our service: publishing letters against the church. The Cardinal also claims they have an anti-magisterial bias. The Magisterium is the "Infallible": doctrine of the church.

Have comments on our articles, join our online social networks:

Otherwise, please rate our articles, and feel free to leave appropriate, legally wise, and compliant and cordial comments, and emails (marcaup@gmail.com (Not necessarily the Author of this article) ; email our editorial staff)!

Or become a fan, or follower of our pages on Facebook:

South African Catholic News Service- Page - the notes that we add: are generally: our articles from this service

Interested in the: Scripturelink Search and Information service- Page, or want to see our google reader: Shared Items: click here

This service is brought to you by the Scripturelink Search Engine

Check our contents via the search engine: against other Catholic services

Add your email to our system to: subscribe to: "South African Catholic News Service"'s dispatches: via email